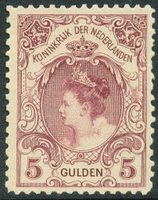 So there I was, working away on my Beatrix stamps, until the postman brought the latest edition of "Filatelie" (Dutch stamp magazine). It contained a fascinating article on the high values of the Dutch Bontkraag (fur collar) definitives of the late 1800s. These high values are recess-printed but were always said to be printed from plates. For some time though, it had been known that the length of the printed image varied up to .84mm. This is usually attributed to paper shrinkage, but Paulus den Daas (author of the article) argues that the stamps with larger image also have more perforation teeth, which cannot be caused by paper shrinkage. So he states that those stamps must be printed from a cylinder. Apparently, trials were carried out at that time with cylinder printing. The flat plates were formed into cylinders, but this caused the image to be stretched somewhat. Very interesting, but I'm afraid I've hardly got any of those so can't really compare the information with my own stamps.

Other points of interest were the fact that the plates became cluttered up with ink which caused the subsequent printings to be rather blotchy (especially noticeable in the word "gulden"). Re-engraving of that word took place and the three types (original, blotched and re-engraved) should be fairly easily recognizable.

Finally, he has noticed that the NVPH catalogue mentions two shades, violet-grey for the earlier printings and greyish violet for the later (again easily recognizable by their different perfs) but that the old colour does still appear in combination with the later perf combinations.

Fascinating stuff really! They're one of my favourite Dutch definitives anyway. More or less decided to just collect Dutch definitives so I would have more means and time to invest in a proper collection, but I also received the specialised stamp catalogue of the Falkland Islands today (in preparation of my Flowers definitives) so that brought me back to normal again. But more on that later!