I was given this book by my Mum and Dad the other day when we met up in Amsterdam, and it was old and looked a bit naff and standard stuff like (well, it was only 20p!) but when I flicked through it I immediately saw something interesting I did not know! It was about the Dutch Naval Heroes definitives, issued during WW2.

What I did know was that the Germans would not allow any depiction of Dutch royalty or the Dutch arms on stamps. The new Queen Wilhelmina definitives (only issued in early 1940) were withdrawn and replaced by overprinted "Flying Pigeon" definitives. Later these definitives appeared without overprint. 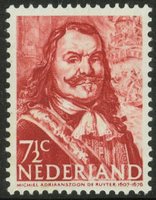 But in 1943 the Germans came up with this splendid idea to make a set of definitives with Dutch naval heroes who were famous for their battles against the British! 'There's propaganda for you!', they must have thought! Little did they realise that all a set with Dutch heroes would accomplish, would be to stir up patriotic feelings even more!


Fantastic story and it shows you that you must read all and everything that comes your way because there will always be something of interest to you, and when you know more, you'll enjoy your stamps more! Which reminds me: do read Michael's blog (the two cdd's under my links)! Very entertaining, you can even win prizes and he's just done a great piece on the GB castle definitives!

Anonymous said…
You can see the series of Naval Heroes on stamps on website:
http://www.geocities.com/filazeeland/zeehelden.htm