It has taken me ages to understand the principle of "Doppelprägung" as mentioned in the Zumstein Spezialkatalog Schweiz, as I understood it to occur during printing; like a double printing. Having only explanations in German and French at my disposal didn't help either! But I've been doing some reading again last night and I've now finally grasped it! 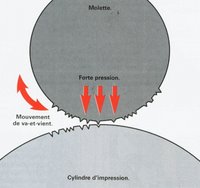 Transferring the image from the roller onto the cylinder has to be done in a to-and-fro movement because one go will not make the recesses deep enough. So the movement has to be repeated several times (at least 4, it says in Zumstein) and if something goes wrong, like a slight misalignment, a new indent is made rather than having the existing one deepened, and this is a Doppelprägung, or re-entry. These lines are obviously very faint, but on this example here, you can see them reasonably well on the left stamp. Look below the 4 ! 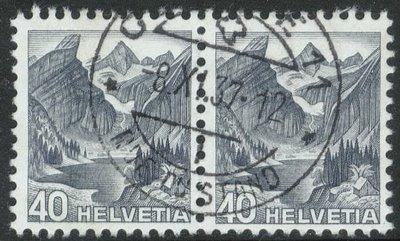