My sister told me the other day that she had had a dream in which I had been writing about fairytales on stamps in a leading Dutch newspaper, being very famous an' all.

Well, I don't mind helping fate along a little, so here's a piece on myths and legends (which would do as well, she said). I don't know any fairytale definitives you see! But there are a few with myths and legends (like French Andorra) depicted, and even though this is far from my favourite set from Austria (they have absolutely stunning "views" definitives!), it will have to do. It is a set of 12 stamps, issued from 1997 onwards. The stamps are a combination of photogravure and recess-printing which usually works very nice. 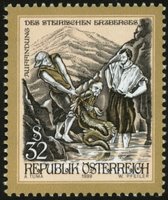 This top value, issued in 1999, shows the discovery of the Mountain of Ore. An old popular legend explains the origin of the iron: In ancient times three fishermen caught a waterman when they were fishing in a nearby lake, the Leopoldsteinersee. When they took him back to their village the waterman began to struggle as soon as the Erzberg came in sight. To get free, he let them choose between three gifts: They could have either a river of gold that soon would end, a silver heart consumed in time, or an iron hat that would last forever. The fishermen chose the iron and when they set him free, the waterman pointed at the Erzberg and told them that they could find iron there.

So there you go. Is there a lesson in there for me as well? Mmhh, maybe I'll just keep on humbly plodding along!