This one's for Eric (My Philately)!

The 1903 definitives of King Alexander were engraved by Monsieur E. Mouchon and printed in Paris. Mouchon is, of course, well known for his engraving of La Semeuse but also of many foreign stamps, such as the portrait of Queen Wilhelmina on the Dutch fur collar set (low values) and this Serbian set.

However, before the set was issued, King Alexander was asassinated, and the stamps were overprinted with the Serbian arms to obliterate his portrait.

There are two typs of overprint: a large, lithographed shield on the lower para values (left), and a smaller shield for the three higher dinar values, printed from metal (right). 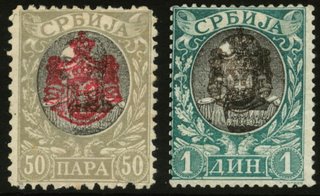 Now, Eric is right in thinking overprints are very fascinating, because so much can go wrong! Here we have high value with a large overprint, meant for the lower values. 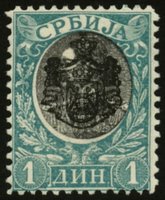 And it gets worse: on some stamps the overprint is found missing entirely! 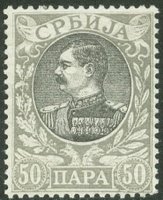 Oh what fun to be a stamp collector!

Thanks a lot for this post. Overprinted stamps are really an interesting field for collection !
June 28, 2006 5:17 pm