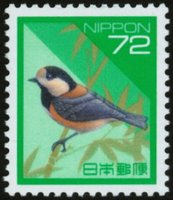 They're about the only three Japanese words that I know, meaning "Nature in Japan" (so I've been told), and they're the titel of the definitive set that started in 1992. I've just decided to make this set my priority for the time being. It is a fantastic set which I love most of all because of the many bird stamps in there, and I like the idea of the similarly striped background on all the stamps apart from the two high values which are very different. The lowest values show insects, followed by a lot of birds, then flowers and finally the two larger high value stamps. It's a great set, but I find it very hard to find anything either on Ebay or from dealers. I've got plenty of used, but I'm having trouble finding the better mint stuff, like sheet blocks, booklet panes etc.