I know that when you think of stamps from Mongolia, you will probably think of all those bright and colourful stamps, depicting Disney and Elvis and other subjects closely related to Mongolia, and you'll be forgiven to doubt whether some/all of these will ever have been inside the country at all, let alone have been used on mail, but way back in the early days, Mongolia issued "normal" stamps, and I chanced upon this one from the 1932 definitive set. 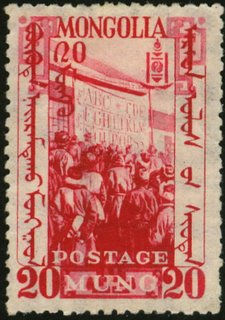 The stamp shows "Mongols learning Latin Alphabet", and I think this single stamp is such a wonderful time capsule. The Bichig alphabet was used until the middle of the 20th century in independent Mongolia. In the late 1930s, Mongolia briefly flirted with using the Latin alphabet. This never really took off. In 1941, Mongolia officially switched over to the Cyrillic alphabet.

Who needs commemoratives? Who dares say any longer that definitives are boring??!!!