We had to wait a long time for it, for the last Dutch stamp to be recess-printed was the 1979 "Union of Utrecht" stamp, celebrating the 400th anniversary of that union which lay the foundation for the Dutch Republic (the arrows representing the seven provinces), which was the precursor of the current Dutch state.

But now we finally have another recess-printed stamp! Celebrating the 400th anniversary of the birth of Rembrandt, the Dutch PTT have issued a sheetlet with ten ordinary stamps, a prestige booklet which apparently is basically an advertisement for a Rembrandt musical and a miniature sheet with one €6.45 stamp (prepaying the registered letter rate), and that stamp is printed in a combination of recess and (I suppose) photogravure or litho. 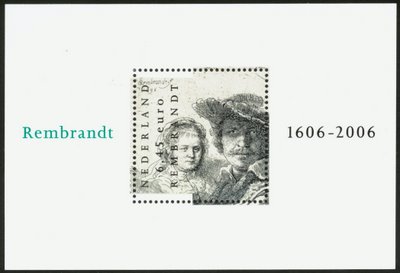 It's a beauty of a stamp but it's a pity that you won't see it on your mail at all (unlike the 1979 stamp which prepaid the inland letter rate), but hey, as an ardent fan of recess-printed stamps I'm not complaining and this sheet will get pride of place in my Dutch collection!