Sometimes when you use a stamp very often on your daily mail, you don't appreciate its design anymore. I suppose this happened to the 1st and 2nd class stamps from Wales which I used quite often when I still lived there.

Now that I live in Scotland, I hardly see them anymore and when I was sorting my Welsh stuff yesterday, I was pleasantly reminded of their actual beauty. There are four designs, each featuring an icon of Wales. When they were first introduced in 1999, Royal Mail issued postcards with the four designs. This way you can appreciate the design even better. I'm showing you the 2nd class stamp, which features a leek carved in sycamore. 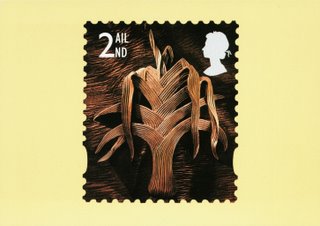 Sycamore wood has traditionally been the wood of choice in Wales for lovespoon making. The leek is a well-known symbol of Wales. According to one legend, the leek is linked to St. David because he ordered his soldiers to wear them on their helmets when they fought a victorious battle against the pagan Saxons in a field full of leeks.

I will show you some other designs later.