I was daydreaming over my catalogues last night and thought what a great idea it might be to make a collection of proper QE2 definitives wordlwide. And with proper I mean definitives that have her portrait as the main feature, which would exclude some 85% of all QE2 definitives, because most are pictorial with just the queen's head somewhere in a corner as a minor part of the design. So I took my Commonwealth catalogue and found that only a handful of countries had ever issued such definitives.

The first I came across was Australia, with no less than four QE2 sets. They started off with a recess-printed set of a Wilding portrait. It's a beautiful stamp, I think. I might even go so far as to say that it is my favourite Australian stamp! 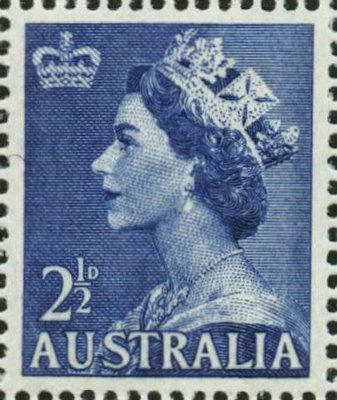 There are only five stamps in the set but there are coil varieties and some values were printed on watermarked paper, so there's some scope for a nice collection. There may well be postal stationery too, but that sort of thing is not mentioned in my catalogue.

Hong Kong is another QE2 favourite of mine, so I'll show you some next time!