I like a challenge! And I have just read Michael's (CDDstamps) latest piece about the new Machins, so I take up the gauntlet here!

I agree that designwise the new stamps (I cannot show them because I couldn't even buy them yet at my local post office!) are not really up to scratch. Much thought has gone into the original Machin design but apparently not much thought into these latest varieties. Although I do think that the large letter stamps aren't too bad because of there larger size.

But I do think the larger font serves a purpose, which makes their ugliness excusable.

Royal Mail's response to the 1995 Disability Discrimination Act, which came into effect in 1998, was to look at the production of their self-adhesive booklets and stamps. One train of thought was to cater for the blind and visually impaired.

Trial books were produced with new Machin stamps with a larger value and a small head, so they could be easily identified by the visually impaired. 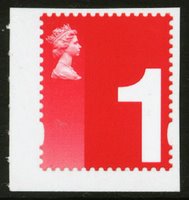 Although these stamps were never issued, the idea of large values was introduced on the booklet covers.

I believe (though I have not seen any confirmation of this) that those new stamps with the large value are a direct result from these trials, and as we're talking definitives here (i.e. stamps that will really be used, rather than just end up in our stamp albums), usefulness should be more important than aesthetics.

Although it would be great if those two could go hand in hand!

nnnnnn said…
Adrian.. interesting thoughts and I can see the reasoning... but ............ what can I say.. I don't think the politically correct point of view is valid.. even though I am one of the worlds most supportive people when it comes to supporting people with disabilities etc etc.. the design is rubbish.. and that is that :-) big smiles all round.. best wishes.. great blog writing.. keep it up.. Michael
August 06, 2006 11:16 am