I know we frequently tend to criticise our postal authorities regarding their philatelic policies, but today I'm in a mood to give credit where credit due.

If you, like me, are a collector of cylinder blocks, you need a lot of money here in Britain, for a cylinder block of the £5 Machin would set you back £30 (75AUD/44EUR/57USD). This is bad enough when the stamps are printed in photogravure so that you ususally only need two blocks to be complete, but what about the late 1990s, when those high values were recess-printed from a mother plate consisting of a number of printing plates, so my catalogue lists 9 blocks in as short a period as two/three years for the £5 stamp only!

The Dutch were better off because their Beatrix cylinder numbers were placed in the top sheet margin above two stamps, so all they had to collect was a pair of stamps plus margin. 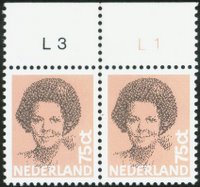 But even that met with a lot of criticism, more so because the cylinder numbers were placed in the top centre, exactly where half sheets were torn or where whole sheets were folded, so trying to get an unfolded cylinder pair was hard work!

So in 1988, the Dutch PTT complied with requests from the philatelic world, and placed the cylinder numbers in the margin of just the one stamp, saving them (the philatelists, that is) lots of money. 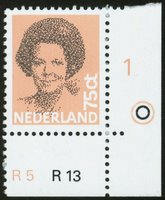