I was at the Mull of Galloway yesterday, the RSPB reserve, and could enjoy the gannets, who always seem to come closer to the coast after gales. I would say that gannets are my favourite seabird. I remember when I was in France last year, we went to "le sept îles", a nature reserve consisting of seven islands and many more humps, on the north coast of Bretagne. There were organised boat trips through the reserve which was great fun. 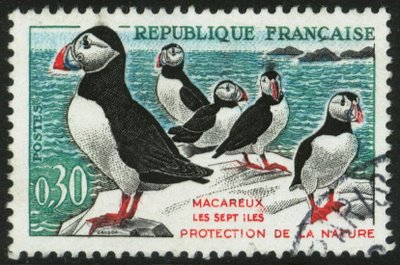 The reserve boasts the second largest breeding colony of gannets in Europe (we were there in May so we could indeed see the rocks crowded with all those gannets, a wonderful sight!), though on this French stamp puffins are shown, for which the reserve is known as well. I love puffins too, with their tragic/comic clown heads.

Oh, and do you know where the largest breeding colony of gannets in Europe is?
Well, of course, it's in Scotland! 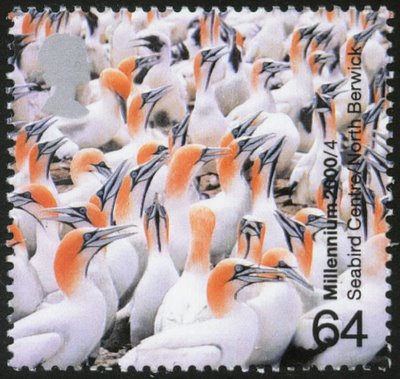 Bass Rock off the coast of North Berwick. Also depicted on a stamp, although I believe there were quite some mutterings at the time of issue because the image may be of a breeding colony of gannets, but I believe it was discovered that the actual photograph was not taken on Bass Rock!