Germany is one of those countries with a more than average number of wonderful definitives, one of them being the "Frauen der deutschen Geschichte", or "Famous Women" as we tend to call them over here, although many women being portrayed were not that well-known outside Germany's borders.

It's a beautiful, recess-printed set that ran from 1986 to 2003 and saw a lot of changes because of political changes in Germany, which is another great thing about definitives: a chart of a country's history! 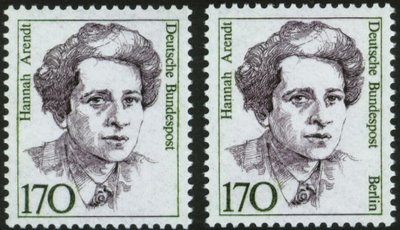 After Germany was unified the inscription changed into "Deutschland", although this only happened some seven years after the unification!

The Deutschland issues can be subdivided into three categories: Deutsche Marken values, dual currency (2000 onwards) and, from 2002, euro values.

Two values have been known to be forged, but I haven't checked my duplicates yet, so here's to hoping!