The nice thing about a definitive set like this one, with all those personalities depicted, is that you can turn it into some sort of thematic collection as well! Although you need to stretch your philatelic imagination somewhat with some people portrayed, with others it is quite easy. 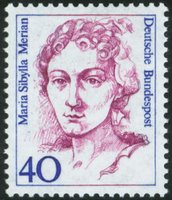 Take for example Maria Sibylle Merian (1647-1717), depicted on the 40pf stamp. She was an artist renowned for her very realistic painting of insects and flowers. The United States issued a set of stamps in 1997, reproducing her flower paintings to mark the 350th anniversary of her birth. 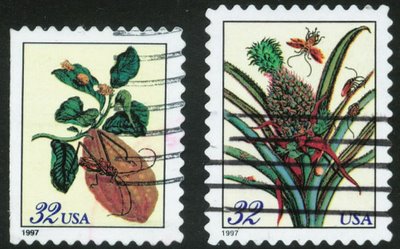 I only have used copies so I can't really do justice to her work, therefore I tried to find some images of her artwork on the net. Funny to find that most works of her can be found as mirror images as well! And there are even copies of her pineapple print without the insect at the top!

The portrait on the stamp is very much like the portrait used on a German banknote. 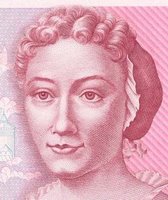