I promised you some perforation differences, so here they are.

In the beginning, the Great Americans stamps were (like most USA stamps) all line perforated. This means, as the name implies, that perforation was done line by line. Inevitably this meant that the intersection of lines was never completely spot on, hence the always rather awkwardly perforated corners of stamps. Single line perforated stamps can therefore always quite easily be recognised.

Later, the stamps were bulleseye perforated. This is a type of perforation whereby the whole sheet is perforated in one go, which yields perfectly perforated stamp corners. The scan shows the two types of perforation in blocks of four, so that the differences are quite clear to see. 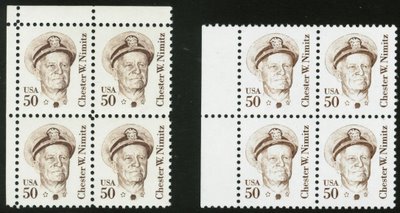 Before I delved into this series I had never heard of the term "bullseye perforation" though. I suppose it is a term mainly used in America. Over here in the UK "sheet perforation" would be the usual term, with "harrow perforation" being another term for the same thing.

A third way of perforating is the comb perforation. Again, the name implies the method: a perforating device shaped like a comb is able to perforate three sides of a row of stamps. The sheet then moves on one row and again three sides are perforated, including the fourth side of the previous row.