I told you yesterday about my various ways to try and streamline my collection interests, but so far all of them have failed. But I think I'm on the right track now. Given that I'm mainly interested in definitives and older stamps (and that I don't care that much about "modern-day" definitives) I've been contemplating for a while to split up my collection in pre and post 1940.

Being Dutch I always tend to think that WW2 started in 1940 (yes, I know that that is not true, but that is the year the Netherlands were invaded) so 1940 is in many ways the end of the world as we knew it, and therefore a perfect cut off point for a collection. And 1940 is of course the year in which the centenary of the postage stamp was celebrated, again a perfect cut off point. I was further encouraged when I noticed that Yvert & Tellier had issued a catalogue of world classics (1840-1940), called "Les classiques du monde".

At first I thought I would "just" do Europe, and thought of a general titel: "Les Classiques de l'Europe" (French being after all a language very much linked to "Old Europe"). But then what to do with all the other stamps that I have, so up came category 2: "The British Empire". Which then left a rest category of world stamps (including all those great early South American stamps that I love) so I decided on a third and final category with a Spanish title (with a little help from my sister), after all, Spanish is world language no. 1 (I think) and there are many Spanish speaking nations in that category, so there we had it: "Clásicos del Mundo".

Anyway, so that was my framework ready and steady as a rock. So yesterday I started with the A and the first country I have stamps of, is Aden.

Aden is a peninsula on the southern coast of Arabia, formerly part of the Indian Ampire, whose stamps it used to use. These can be recognised by the cancellation number: 124. In 1937 Aden became a Crown Colony and its first stamps were issued. It is a set of 12 stamps in one design, showing a dhow. 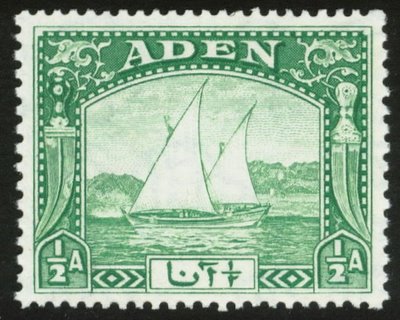 A dhow is a traditional Arab sailing vessel with triangular sails. It was used for ferrying passengers and freight, mainly dates and fish. 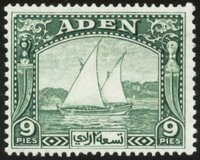 The set was recess-printed by De La Rue on paper with watermark: Multiple Script CA (sideways). Perforation is 13 x 12. Date of issue was 1 April 1937. It is quite a straightforward set. The Part 1 catalogue from Stanley Gibbons does not list any shades or varieties or whatever. 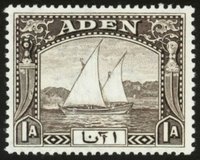 The image of the ships on the stamps were used to design the flag of the Colony of Aden. 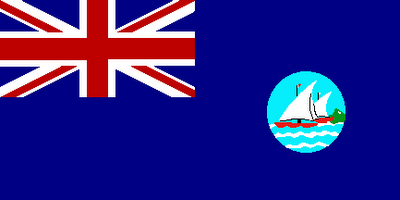 The whole set was issued in one go and no further values were added. 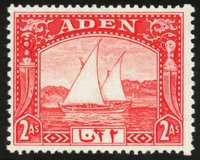