The dhow definitives of Aden were replaced in 1939 by a set of pictorial definitives, each having a portrait of King George VI in the top lefthand corner. This set was recess-printed as well, but printed by Waterlow and Sons, perf 12.5 on paper with watermark Multiple Script CA. This set was not received favourably by the sultans, because of the King's portrait being included. That is why the Aden Protectorate States later (1942) got their own stamps, depicting their respective sultans.

In all six different designs were used for 13 stamps. Most values were issued on 19 January 1939, but in 1945 a 14 annas was added to the set and in 1948 a distinctive shade (bluish green) of the 0.5 annas appeared. And this posed an immediate problem for my framework! What to do when 1940 was to be my cut off point! There were basically two options: either complete any set that would be started before 1940 or just ignore all additions after 1940. But just thinking of those incredibly long Scandinavian sets that were started in the early 1900s and are still around (from Norway and Denmark, for example) made me go for option two. 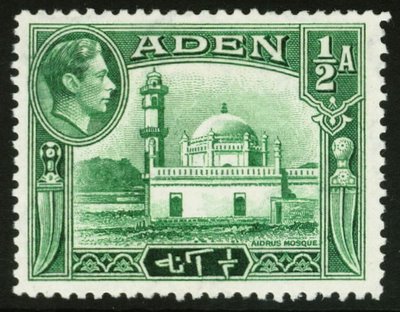 The 0.5 annas yellowish green shows the Mosque of Sayyid Abdullah al-Aidrus and minaret in Old Aden Town, him being the patron saint of Aden. The buildings date from the 15th century. This design was also used for the 2 annas sepia.

Will show some more designs next time but am a bit rushed for time now.