I'm always thinking of ways to streamline (and maybe cap) my collecting interests, because I usually find myself bogged down in my all world collection. That is how, at one stage, I came up with the idea to concentrate on definitive sets that were later depicted on "stamps on stamps" issues. So I grabbed my first catalogue (Michel's Europe No. 1) and started with the first country, it being Andorra.

The French Post Offices of Andorra issued a miniature sheet in 1982, commemorating a philatelic exhibition, with an image of the first proper Andorra definitives ever issued. 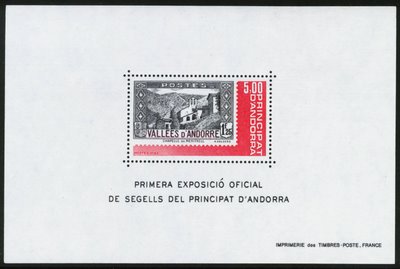 That landscapes set, issued from 1932 through to 1943, was the first set issued for French Andorra. Before that, a set of French stamps with "ANDORRA" overprint was in use (see some entries ago). It's a recess-printed set with in all five different designs.

Two designs were clearly more often used than any others, one of them being shown on that miniature sheet. It is an image of the Meritxell Chapel, which was burnt down in 1972, but a new chapel has been built on the same place. 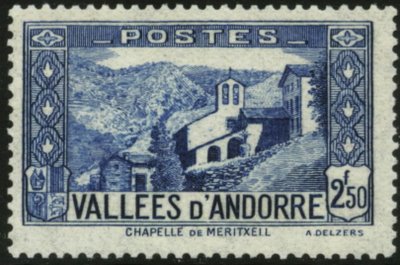 The other image is that of the medieval Bridge of Saint Anthony. 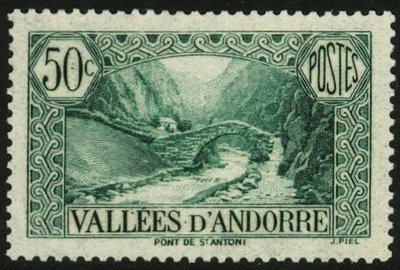 It's quite a straightforward set with only two gems to be tracked down: a double overprint of the 20c on 50c, and a 20c in ultramarine rather than lilac rose (bridge design). The origin of this last stamp is, I believe, still being debated, with "colour essay" being a plausible explanation, although the stamp is often described as "not issued". You need to fork out quite generously if it ever comes onto the philatelic market. Needless to say I've never seen a copy.