I was going to take you to West Berlin today but I just read this French blog today: http://blog-philatelie.blogspot.com/ . It's a great blog if you're into French stamps (well, mainly) and if you read French.

It's an entry about the Sower stamps of France. Dominique showed a cover sent by Larousse (of dictionary fame), franked with a Sower stamp. The nice thing about the cover is that the Larousse logo also exists of a sower. The motto "je sème à tout vent" means: I sow in all winds. 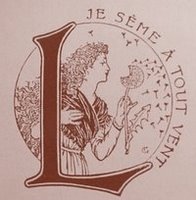 The article doesn't explore the links between the two sowers further but goes on to discuss the designer of that logo who also designed stamps.

The funny thing, however, with that motto is that that is exactly what the original Sower stamps were criticised for: the stamp depicts a sower sowing against the wind (look at her hair), which is something very stupid to do (apparently), and here we have a sower sowing in all winds! 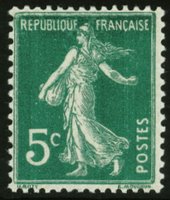