Hello, I'm back again from France and had a wonderful time in the mountains near Le Grand Bornand and Annecy. Lovely area! Sun and snow! Great stuff! And of course I managed to stumble upon a philatelic shop in Annecy so I could get some more old Marianne de Gandon stamps which I may show you at a later date.
But today I want to show you a new France stamp, issued to commemorate the 400th birth anniversary of the Dutch painter Rembrandt. 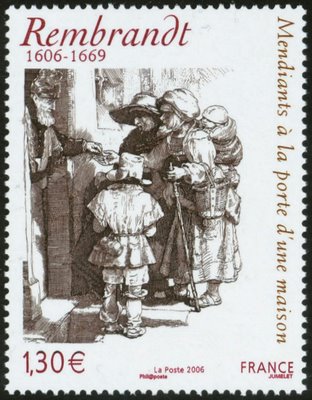 What a beautiful stamp! So stylish, so true to the greatness of the artist! Very well done! Compare this to the rubbish the Dutch dare to produce. 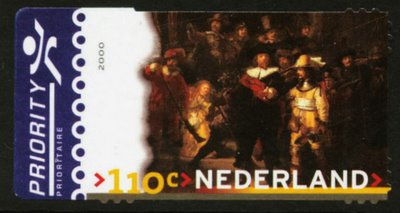 But, to be fair, I don't think paintings on stamps is a very succesful design concept. It hardly ever works to do justice to a painting on the tiny format of postage stamp. I suppose one reason why the French stamp works so well, is that they did not use a painting but one of Rembrandt's engravings. This, combined with the fact that it is an engraved stamp, makes for a very succesful production, I think.
And to be even more fair to the Dutch, they once did know how to produce great Rembrandt stamps. 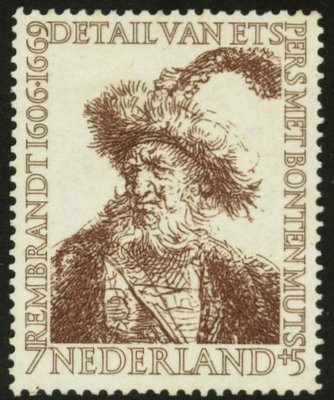 This is a stamp from a set issued in 1956, to celebrate the 350th birth anniversary of rembrandt. The set of five stamps consists of details of Rembrandt's engravings, and again this works so much better!
Wouldn't it be great though, to set up a thematic collection of all of Rembrandt's work? Or, seeing my above comments, of all his engravings on stamps! I know that someone in the Netherlands has made a CD-ROM of all Rembrandt stamps ever issued, so that would be a great work or reference. I might just ask that for Christmas...
:-)
Adrian
France