Hi, I'm back again! Visited friends and family abroad and now we're back, doors bolted, phone off the hook (doesn't that sound old fashioned in this age of mobile phones?!), curtains closed, candles burning, wood burner blazing and some nice carols in the background. Ready to hibernate!
And ready to finally get back to my stamps. Bought some nice stuff when in Holland, which I will show you later when I'm a bit more organised. But this morning I came across some items I bought months ago when I still had the aim to work on an all world pre-1940 collection. Funny how you buy things and almost immediately after you change directions as far as collecting is concerned. Well, I do, anyway. Very tiring!
But anyways, this is a set issued by Afghanistan in 1932, to commemorate the inauguration of their national council. The stamps show the National Assembly Building and the Council Chamber. I have the whole set but I can't show you those because I haven't got a clue where they are (I really need to get a grip on things!). But these two are imperforate plate proofs of two of the values, so that's something different for you to look at, while I'll go and find my mislaid stamps! 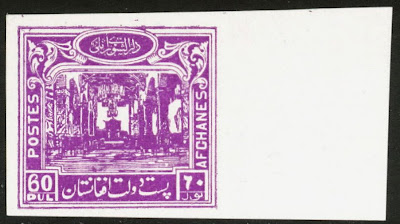