The definitives with all those wonderful famous (or not so famous) women were originally printed in sheets of 100. From 1994, they were printed in sheetlets of 10. Only two values, the 200pf and 300pf, were printed in both formats. It is apparently not possible to distinguish between the two, unless you've got a marginal copy. The sheetlets have a lined border around the sheet, whereas the margins of the larger sheets were mainly white. These do, however, contain a "Formnummer" in the righthand bottom corner and counting numbers along the top, as shown on this block here. 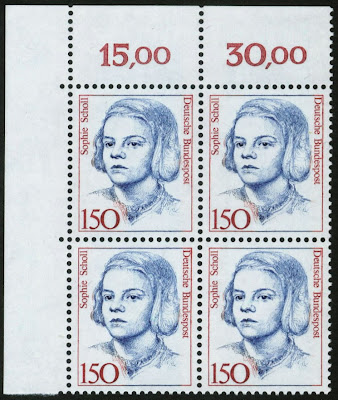 If there's any German speaking readers around, please inform me what exactly a "Formnummer" is, for I don't think it is a cylinder number. The stamps are recess-printed in two colours, so I assume would have needed two cylinders, and there's only one Formnummer on the sheets. I suppose it is a numbering of the print runs but then, all values appear with Formnummer 1, 2 and 3, and I can't imagine that all values would have had the same amount of print runs. I once asked someone on eBay (who was selling these blocks with Formnummer) to explain but never got an answer. I hate that! But then again, maybe my German isn't up to scratch!