My latest find in my search for Wilhelmina stamps is this 10c stamp from the "Scheepje" (little boat) set. It is surcharged with 5c and a red cross. It may be an official Red Cross issue, but I believe the proceeds of this stamp went to several charities. The stamp was issued in 1915 and even though the basic set itself was issued in Curaçao and Surinam as well, the Red Cross surcharged issue only appeared in the Netherlands Indies. 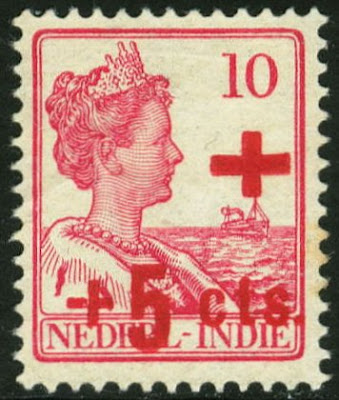 But really why I'm showing you this stamp is because of the designer. The Dutch NVPH catalogue states that H. Seegers is the designer but other sources state that the actual portrait may be designed by Jan Veth, designer of many Wilhelmina definitives. As his are among my favourite designs (in which I seem to stand rather alone I'm afraid) I'd like to know more about this. So if anybody of you knows anything, you know where to find me! And I'll show you some beautiful Veth stamps soon!