As promised, here is my all time favourite Dutch definitive set! And it is universally disliked, I believe, though I do not know why!

What happened was that the Bontkraag stamps had been around since 1899 and forgeries had appeared in the early 1920s so the Dutch PTT wanted to change design as soon as possible. They held a competition but didn't receive anything they could use. By then it was 1924 and time was running out so what they did was take an old design (from 1904) that was once used in the Dutch colonies. 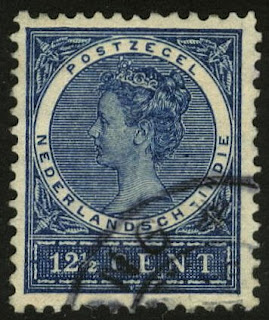 This stamp was designed by Mr Jan Veth. He was asked to come up with a similar design for the Dutch definitives. The result was, in my humble opinion anyway, a very stylish design, printed in photogravure, but the production is so wonderfully excellent that it looks like the stamps are recess-printed.

I think most of the criticism stems from the fact that the design concepts were regarded very old-fashioned and of course the portrait was from the early 1900s as well, when Queen Wilhelmina was still a mere girl in her early twenties, rather than the grown-up woman of 44 she was when the stamps were issued. But I think it is a beauty. 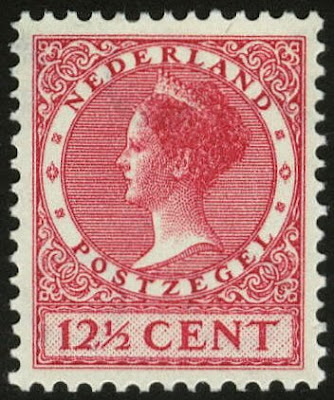 And it is a very interesting set in a philatelic sense as well. There are stamps with and without watermark, various perforation types, recess-printed high values, special exhibition stamps, and of course all the old 1904 colonies' stamps, etc.
And during the lifetime of the set, trials were performed regarding the production of coil stamps. Ordinary stamp strips from sheets tended to tear prematurely and so they experimented with leaving out various pins. There are quite a number of "interrupted perfs" to collect, some of which rather rare! 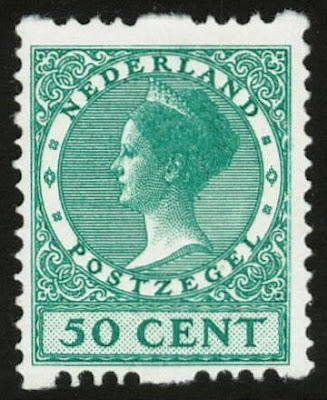 And the stamps were also overprinted for the use of the International Court of Justice in The Hague. 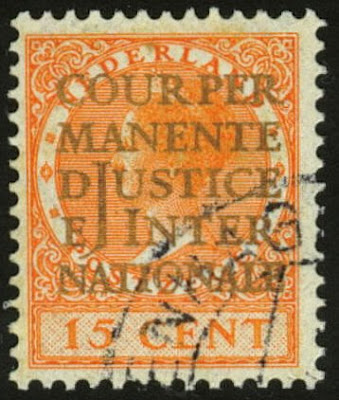 So you see, enough material to collect nothing else but this wonderful set!