Skip to main content
on January 17, 2007
THE LION IN PHILATELY
The stamps of British East Africa fall in the same category as the Uganda stamps I showed you yesterday. Again, we have two Lions supporting a shield bearing the Queen's Head. 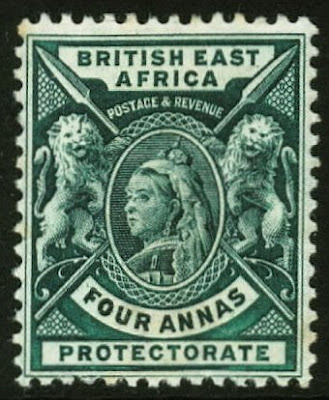 The scan won't show this, but the stamp is in the small definitive format, which is a bit of a shame as the design could do with a larger format. But that was apparently noticed back then as well, for a year later, the existing rupee values (plus a few new ones) were re-issued in a larger format.
:-)
Adrian