In a philatelic sense, the second world war is a very interesting period to collect and study. The war had an impact on so many aspects of the postal systems around the world.

Take for example the Liberation set of the Netherlands. At the time, all stamps were printed by Joh. Enschedé & Zonen in Haarlem, the Netherlands, even during the war. But the Dutch government in exile, situated in London, ordered a set of definitives bearing Queen Wilhelmina's portrait. This was in 1943, so obviously Enschedé could not be asked to print that set (the Germans had already withdrawn all stamps bearing the Queen's portrait way back in October 1940). So these stamps were printed in England by Bradbury Wilkinson. At first, they could only be used on the Dutch merchant navy ships but after the liberation they were for sale in the Netherlands as well. Even some new values were added but still printed by Bradbury Wilkinson. The sheet margins of the stamps (shown here is a value issued in 1946) show the printer's imprint. 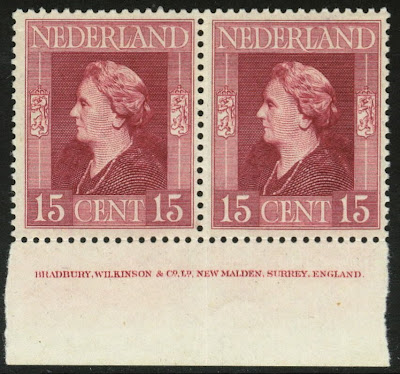 A similar design was used for the Netherlands Indies, but here again, Enschedé, who would normally print all Netherands Indies stamps, was out of the question. So in this case the American Bank Note Company was asked to print the set. They had their printer's imprint included in the design. 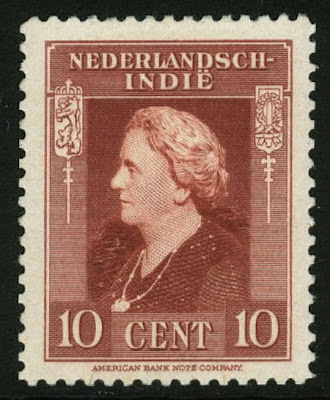