Skip to main content
on February 03, 2007
THE LION IN PHILATELY

Hi Michael! Thanks for mentioning my blog! Oh, and everybody, do read Michael's (CDD) blog too, it's fabulous (see my links). No lions though..... :-). And while I'm at it: don't forget Eric's blog either!
Our lion author is reaching the final stages of his philatelic journey and has returned to Europe, or to be more precise to the Benelux. By now he's stating that he will not discuss each and every stamp issue with lions on but there's three more nice ones to come. Indeed, he skips the wonderful lion stamps of eg Finland and Bulgaria (sorry guys), but does give the Luxembourg Lion a mention.
Aparently, the Lion of Luxemburg has its origin in the Arms of the house of Limbourg. The Arms show a lion rampant gules on a shield "burelé d'argent et d'azur d'onze pièces"; that is to say, a red lion on a shield divided horizontally into eleven bars of alternate silver and blue. Now, the stamps themselves are monochrome so can't show all the different colours, but it is very clear from the design that only TEN bars are shown. 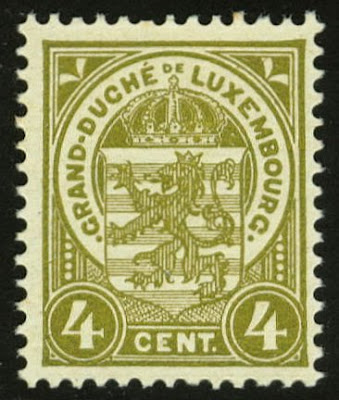 I had a look at other stamps on which the Arms are included and had a look on the internet to find information about the Arms but all sources mention only ten bars, so that must be the right number. I'm afraid my British author wanted to show off his French a little and in the process has mixed up the number of bars!
Anyway, this stamp is from a set of 6 basic values (part of a larger set), issued from 1907 onwards. The design is by P. Blanc and the stamps are printed in letterpress by Joh. Enschedé & Sons in the Netherlands. The 5c was redrawn and given a new colour in 1926, but I can't show you a copy. That was also the last addition to the set, but in between many values were surcharged on various occasions, like this 6c on 2c, issued in 1921. 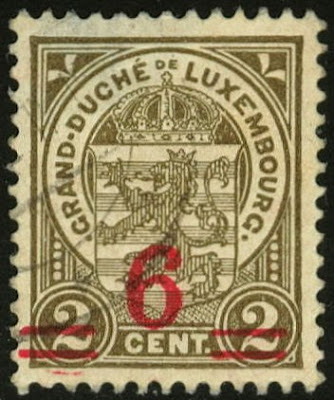 There's also a very pretty "officiel" overprint for use in government departments, but again I have no copy to show you. Sorry about that!
:-)
Adrian