When King William III of the Netherlands died in 1890 at the age of 73, he left behind his second wife Emma (only 42) and ony remaining child Wilhelmina (10). His first wife and his three sons had long since died.Wilhelmina was still too young to become Queen, so Emma became Queen Regent. With that, she became the first female Head of State.

Emma had been credited for bringing back the womanizer that was William III into the fold and improve the standing of the Dutch Royal family. During her short reign (1890-1898) she improved matters even further, especially with regard to the cooperation between royalty and government.

It's a shame that Emma never apperared on any definitives. That would have been great, but from the beginning of her reign, the definitives showed the young Princess Wilhelmina as Queen-to-be.

Therefore, ony one or two philatelic tributes have been paid to Emma, which seems a little unjust for a woman who's done so much to improve things. One of those is from a set of Red Cross stamps, to mark the 60th Anniversary of the Dutch Red Cross. It's a charming stamp, designed by Miss Debora Duyvis and recess-printed by Enschedé. The set was issued in 1927. 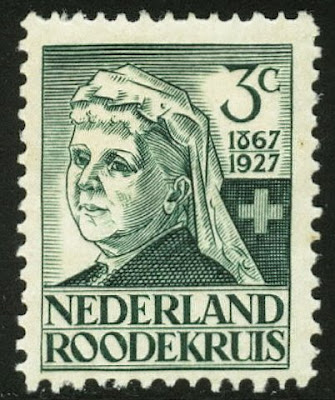