Skip to main content
on April 02, 2007
HONG KONG MACHINS
Hello again, everybody! It's been ages hasn't it?! But too much work and a stubborn bug have kept me from doing anything else than playing catch-up. But everything's improved now and I'll have much more time to devote to my stamps from now on, so that's good! Have you missed me? Yeah, bet you have!
:-)
I've been working on my Machins lately and am doing quite well, I must say. I usually start organizing/mounting them and then give up after a few weeks, but I've now finished my singles collection from 1967 to 1998, so I've never come this far! Nine more years to do and that's me done! Great!
I've also incorporated the Hong Kong Machins into my collection. The Hong Kong Machins are just as interesting with quite a lot of varieties to collect! I managed to get a nice lot of them at an auction, of which I'll show you a few items here today and tomorrow.
The lot included a number of cylinder blocks. From those you can conclude that the cylinder for the Machin head (in black) is most probably used for all values, for the colour cylinders are all numbered A1 and the black cylinder is numbered A7. Pity that the printer's imprint (Enschedé) isn't included in the margins. 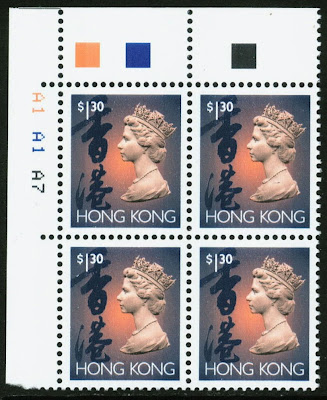 Most values are also available in coils. Single stamps are easily recognisable because of their cut side perforations (the top and bottom ones are torn). 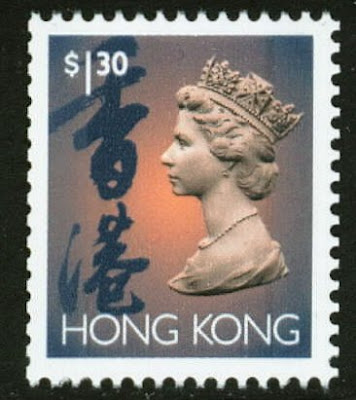 But it's nice to try and get them as a strip, with the coil number on the back of one of them. Again, these were printed by Enschedé.

Tomorrow I'll show you some more but for now I'll leave you with the mention that if you want to read much more about Machins, have a look at the Machin Mania blog (see list). It's a great blog with an enormous amount of information about this iconic stamp!
See ya!
:-)
Adrian
British Commonwealth