Skip to main content
on April 08, 2007
IN FULL GLORY
I had actually planned to show you some more defaced Wilhelmina stamps from the Netherlands Indies but the website I needed to visit for some information is momentarily unavailable, and as it's such a gloriously sunny day here, and I'm in a good mood, I thought, well, why not, she deserves a bit more than being constantly portrayed defaced by Japanese overprints.
So here she is in her full glory, bless her. 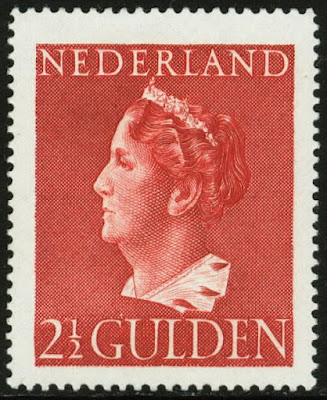 It's one of the high values from the Konijnenburg definitives, issued in 1946. The set is named after the designer Willem van Konijnenburg (lettering is by J. van Krimpen though), who, by coincidence, happened to have been Wilhelmina's art teacher years before!
It's a small world, eh?!
:-)
Adrian
Wilhelmina