Skip to main content
on April 06, 2007
MARIANNE DE GANDON
I bought this card the other day, because of the study of the Marianne head by P. Gandon on it. 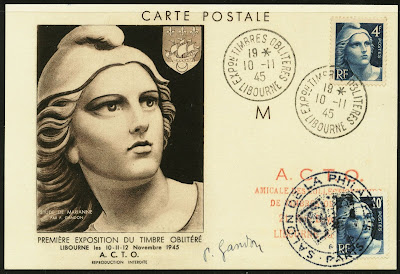 The card was produced for the first exhibition of cancelled stamps (if my French doesn't desert me) in Libourne, France from 10-12 November 1945. The 4f which is cancelled on the first day of the exhibition was issued on 15 February of that year. The 10f, however, was only issued on 15 March 1946. The stamp has been given a completely different cancel, from a Paris stamp exhibition "Salon de Philatelie". I can hardly read the date, but think it could be 6 April 1946.
Now I know that this sort of thing has happened before (i.e. various cancels of various shows on one cover) but seeing that there are so many examples of this particular card with these two particular stamps on them, I was wondering if there was a story behind this card. Does anyone know anything more about this?
By the way, do note that the card was also signed by P. Gandon (as were all the other examples I have seen on the net). Wonder whether that would have happened in 1945 or 1946?!
:-)
Adrian
France