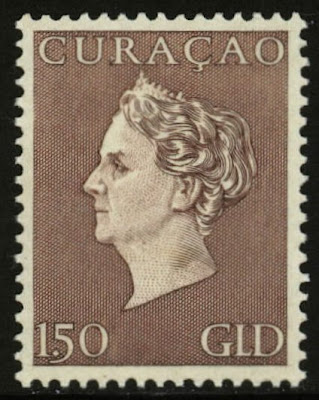 I know it looks like quite an ordinary stamp, maybe even a bit dull, but I quite like it. Why?
Well, it is part of the Hartz definitives (named after the designer) that were issued in 1947/1948. The design for the low values was used in both the Netherlands and the overseas territories, the middle values were of a slightly different design and only issued in the Netherlands, but there were three in the set. But this single stamp, issued on 16 August 1948, is the only high value issued anywhere in the Dutch Kingdom.

Seeing that the set did not survive long because Wilhelmina abdicated on 6 September 1948, I just wonder whether this design was meant to be used for all high values, both in the Netherlands and abroad, but that events cuaght up with the issuing schedule! Would have been nice! But instead we got the Juliana high values in 1949, which are beautiful, so I'm not complaining! 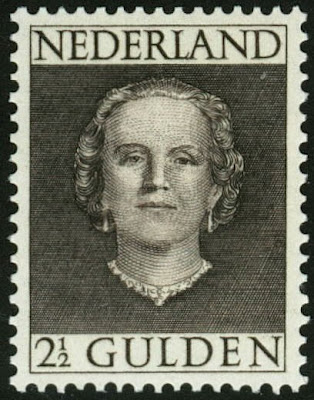