Skip to main content
on April 30, 2007
QUEEN'S DAY
On 30 April, the Dutch celebrate their Queen. It is Queen Juliana's birthday. As long as I can remember, thousands of people would be parading past Soestdijk Palace, offering flowers and gifts to the royal family on the steps. All very Dutch and nice and cosy! It's a pity there's no philatelic memento of these parades, which were so much a part of our lives back then. When Beatrix became queen, in 1980, she announced that this day would remain Queen's Day, to honour her mother (although the fact that she has her birthday in cold January might have influenced her as well!). But the parades were over. Instead, Beatrix would choose two places to visit each year, and there various events would be staged. The 1992 stamp to mark her 12.5 year reign shows Queen Beatrix during Queen's day 1992 in Rotterdam. 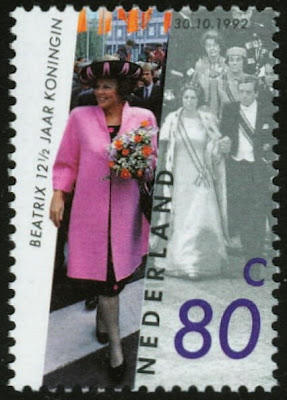 I wonder what Willem-Alexander will do when he takes over!
:-)
Adrian