Skip to main content
on May 04, 2007
A FIND!
When I bought them at Congress the other day, I was only looking for a couple of used examples, to try and get the various shades and sizes of the overprint. So here's one of them. 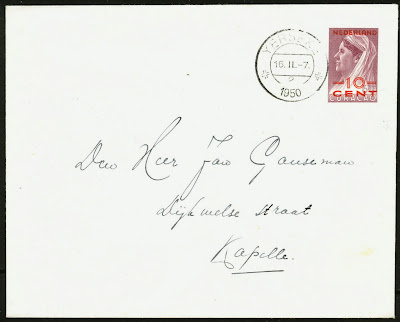 After World War II, paper was very scarce, so when in 1948 a large badge of pre-stamped envelopes for use in Curaçao resurfaced, produced in 1940, which meant of good pre-war paper quality, it was decided to not destroy these but to put these to good use.
However, there was no need for them in Curaçao, which by that time had been re-named the Netherlands Antilles anyway, so the Dutch government bought the envelopes back from the Ministry of Overseas Territories and decided to overprint them for use in the Netherlands. The original envelopes had been printed in lithography and the overprint has been applied in typography, both by Joh. Enschedé & Sons. The envelopes were distributed to the various post offices in one go in February 1950 and remained valid until 1 January 1954.
The envelopes are not particularly scarce or anything, but you don't see them that often. However, this one turned out to be extremely special. Why? Have a closer look: 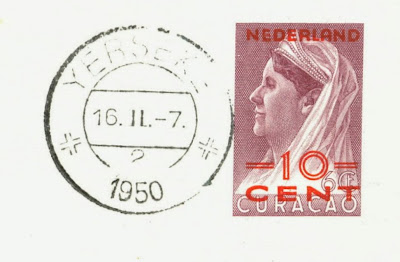 And now let me tell you this: the "Handboek Postwaarden Nederland", a Dutch handbook which is still being compiled (4 volumes by now) with all information on each and every postal issue in the Netherlands, states: ...the earliest known date of usage is 27 February 1950...
Exactly, mine predates that statement with 11 days, being cancelled on 16 February 1950! I've notified the editors of course, so this is now officially the earliest known date of usage! And it's in my collection!
I'm a happy boy now!
:-)
Adrian
Wilhelmina