Skip to main content
on May 29, 2007
MACHIN'S ANCESTOR?
The Machin design I showed you the other day is usually hailed as very innovative and wonderful, departing from all the fuzzy designs that were around at the time (1967). But, wonderful though it may be (and I'm a fan!), it has all been done before. For in 1953, the "Juliana en face" definitives of the Netherlands were replaced by the "Juliana en profil" set. 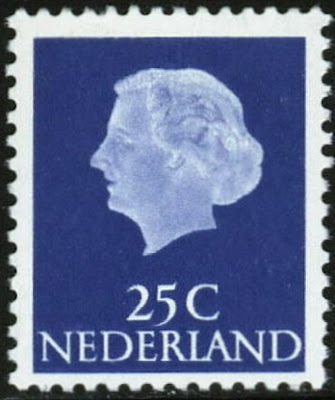 It's very similar to the Machin design: just a portrait of the monarch and a value. The only difference is that the Dutch were obliged to add the country name, which of course the British don't have to. And this profile design predates the Machin stamp by 14 years! Sorry about that, guys!
:-)
I've started sorting the set last night and found that there's quite a lot to it. The normal specialized catalogues mention two types of paper: ordinary paper for all values and phosphorescent paper for some values, issued from 1967 onwards. However, there are four types of ordinary paper to distinguish (you need a UV-lamp for this): dull with a hint of yellow, dull with some white fibres, dull with a lot of white fibres, and dull with a hint of violet. So you now know what I'll be doing over the next week or so: checking all my copies! Ppppfffff...
One other thing I found out, and which I can show you on a scan, is that the Dutch PTT was not very happy with the dark colours of the stamps and asked the printers to keep the features of the head as light as possible, so postmarks could be read more easily. This was duly done, but with later print runs less attention was paid to this and darker heads have been printed. 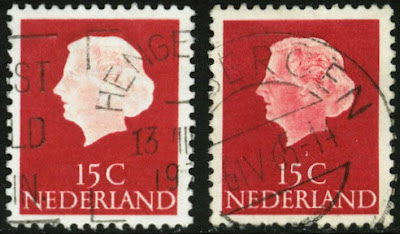 So there's another way to make your Juliana collection (what, haven't you got one?) a bit more interesting!
:-)
Adrian
Benelux

nnnnnn said…
Adrian, once again very interesting.. may I use some of thetext in my IPDA Newsletter.. and the picture please.