Skip to main content
on July 06, 2007
DATE BLOCKS
Eric wrote a piece about the French "coins datés" the other day and was wondering whether this was a typically French thing. I don't know whether the French were the first to introduce these dates, but that could well be. I believe there are Sower stamps with dates in the margin as well. The website Ask Phil mentions a date of 1922.
But since then the idea has been taken on by other countries as well. Here's a block from Slovensko with a printing date of 17 March 1939. 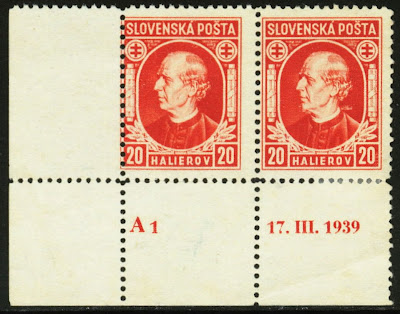 Here in Britain these dates were only introduced in the early 90s, I believe.

They are very popular because you can find out precisely when certain stamps/varieties were printed. For example with the modern Machins (not the one shown here), there were printings on bright, intermediate and dull paper and as the difference was sometimes very hard to see (especially between bright and intermediate), you have to rely on date blocks to be sure what type it is. But then there are those that are printed on both types of paper on the same day. So that's where I dropped out.
:-)
Adrian
British Commonwealth Czechoslovakia and Poland Machins