Skip to main content
on August 22, 2007
ANOTHER HERO
But this time from the Netherlands. This year marks the 400th anniversary of the birth of Admiral Michiel de Ruyter, one of the greatest Dutch naval heroes of all times, who made his fame during the Anglo-Dutch wars in the 17th century. The Dutch TNT has not seemed it fit to issue stamps to mark this occassion, but luckily the postal authorities had more sense one century ago.
In March 1907, a set of three stamps was issued to mark the 300th anniversary of De Ruyter's birth. Commemorative stamps were still very much a novelty back then (oh bless) and no-one really knew what to do with them, so all sorts of funny regulations were set up. This set, for example, was only available and valid for use during a short period of less than three months. Consequently, masses of unsold stamps were left over after this period. Thankfully, destroying this stock of stamps was considered not done, so the remaining stamps were overprinted to create a whole new set of postage due stamps (13 values in all). Here's one of them. 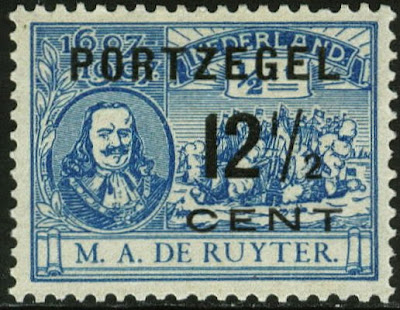