Skip to main content
on August 24, 2007
CHACABUCO
So far, we've liberated Peru and Argentina, but Chile was part of the plan too for San Martín. He gathered an army and led it across the Andes. That enormous feat took them 21 days and led them through 50cm narrow tracks, extreme temperatures and high altitudes. Despite this hardship, the Army of the Andes was ready to fight the royalists when entering Chile and even though not everything went according to plan, the Army of the Andes was eventually victorious. 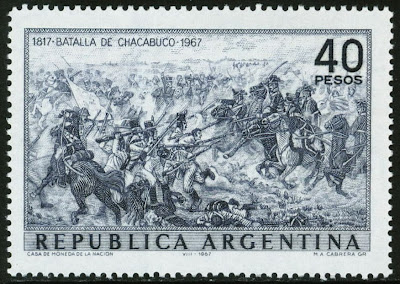 This Battle of Chacabuco (depicted on this stamp) was basically the end of the royalists hold on Chile and on 14 February 1817 San Martín was appointed Governor of Chile. He resigned immediately and handed over the post to Bernardo O'Higgins who then became Director Supremo del Estado de Chile. Sounds good, doesn't it?!
:-)
Adrian
South America