Skip to main content
on August 25, 2007
COLONIALISM
No, have no fear, I'm not gonna advocate a return to the old colonial days, but philatelically they had the advantage (if you like definitives, that is) that the overseas territories/colonies used to have similar definitives to those of the mother country. That goes for the Dutch situation anyway. Netherlands New Guinea was the last area to continue with this practice. Between 1954 and 1960, they issued a set of Juliana En Profil stamps which were very similar to the Dutch version.
The final set to have identical designs for the Netherlands and the overseas territories was the Juliana En Face set, introduced in 1949. 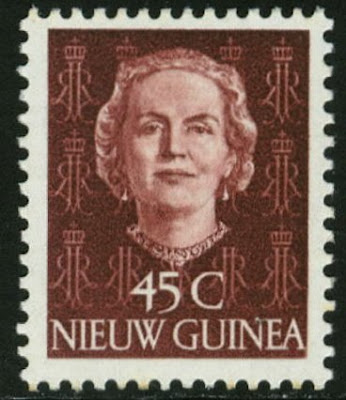 This is one of those stamps, issued in Netherlands New Guinea. Here, these definitives were issued between 1950 and 1952. It's one of my favourite Juliana sets as it is the end of the old-fashioned era. After this, all definitive sets and most commemorative items too, were "modern", and therefore less attractive (in my humble opinion anyway).
:-)
Adrian
Benelux