Skip to main content
on August 21, 2007
SECRET MEETING
We're staying with San Martín just a little longer. Here we have a stamp from Argentina issued in 1972 to mark the meeting at Guayaquil 150 years before. 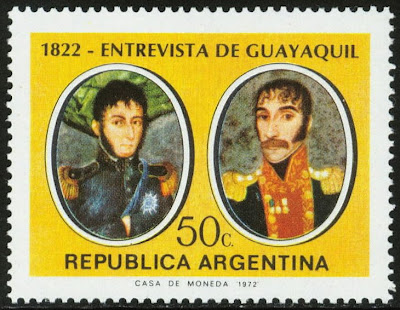 In 1821, again thanks to San Martín, Peru was declared independent. San Martín became Protector of the new nation. But on 26 July 1822, a secret meeting was held between San Martín and Simón Bolivar (the two men depicted on the stamp), after which San Martín immediately withdrew from Peru and returned to Argentina. 'Til this very day, historians are still puzzled as to what was discussed between the two!
:-)
Adrian
South America