Skip to main content
on August 18, 2007
VETH POSTCARDS
Yes, I know, I know, I haven't been here to update my blog often enough but I've been away a couple of times and I've also written a few articles so didn't feel like doing this blog too, but I'm starting afresh now, if only to maybe tell you less but at least I can show you some items to have a look at!
So today I'm showing you this: 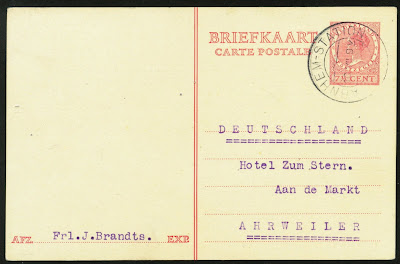 This is a postcard with a printed 7.5c Veth stamp. The Veth definitives (named after the designer, Jan Veth) were issued from 1924 onwards and are one of my favourite designs! You can tell that this card is from the earlier printings (1926-1929) because there's only one line for the return address. I do not yet have a good postal stationery catalogue, so I hope I'm getting my information right here. There are also versions which are in Dutch only, you see. The postmark is a so-called short bar cancellation (the long bar cancellation has the centre bar run through the double circled lines).
It's not really anything special but I have included it in my Wilhelmina collection to show the different types of postal stationery with the Veth image incorporated.
:-)
Adrian
Wilhelmina