Skip to main content
on September 14, 2007
NEW YORK
Ever wondered what New York looked like in the 1600s? Well, now you know: 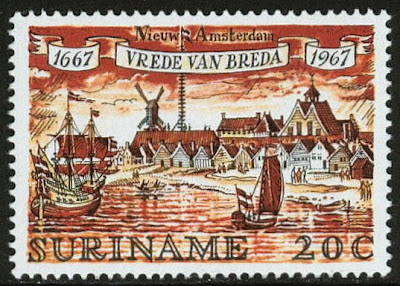 Picturesque, isn't it?! You will of course know that New York used to be Dutch and called Nieuw (New) Amsterdam. But then the English took it from the Dutch and renamed it New York, after the then Duke of York who would later become King James II. The following Treaty of Breda (this stamp is actually part of a set commemorating that Treaty) ratified this takeover and New York remained in English hands. Imagine what would have happened to the world if this hadn't happened and the whole of America would have spoken Dutch!
:-)
Adrian
Benelux