Skip to main content
on September 05, 2007
THE WIND IT BLOWS...
Yes, we're staying with windmills but this time we're off to Paris. This stamp from Bhutan depicts a painting by Vincent van Gogh of the Moulin de la Galette. 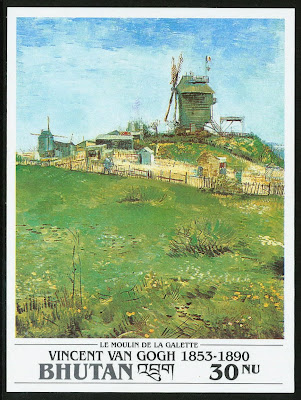 I'm not sure whether it would classify as a proper stamp, though. It's huge and not mentioned in my world catalogue. But it seems to be part of the Van Gogh set issued in 1991. I like it because it brings back memories of Paris for me. I always stay in a small hotel in Rue Tholozé, which leads to the Rue Lepic. On that street you'll find the Moulin de la Galette, a lovely little restaurant with the same name and the house where Vincent van Gogh stayed for a while with this brother. The only thing I'm wondering is whether the scene painted by Van Gogh was how it was then, which I can't really imagine as it's so built up now and their house on Rue Lepic is very much part of that built-up scene. But who cares.
Anyway, curious? Have a look here, and you know where I spend my time abroad (although I do try and avoid the Place du Tertre at all costs). The site has nothing to do with me, mind, I just happened to find it when looking up some info for this post.
:-)
Adrian
South-East Asia