Skip to main content
on October 17, 2007
OVER THE MOON!
My blog readers of old will know that I've written many entries on the Swiss landscapes definitives of 1934-48. These can still be found under "Switzerland" in the country list on your left. This was basically my first attempt to build a specialised collection of a definitive set and therefore still holds a special place among my stamp books. Through the years I've managed to lay my hands on some relatively rare and unusual stuff, but none as rare and unique as the item which I received earlier this week. 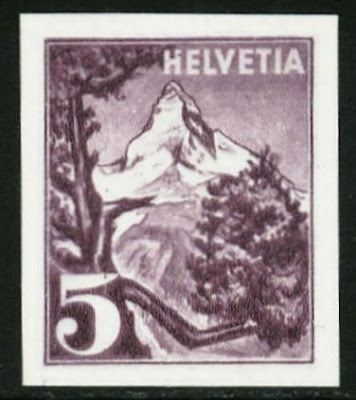 It's an unaccepted design by Rösli from the 1933 Post Office competition for designs for a future definitive set. Although the write-up does not specifically mention that it is linked to the 1934 definitive set, the timing of the competition and the subject matter would let us safely conclude that it is. Apparently this was the first time the item was on the philatelic market. There was a second design but I'm afraid that had already been sold before I was notified.... Never mind, I'm as happy as a lark!
:-)
Adrian
Italy and Switzerland