Skip to main content
on November 16, 2007
MULTIPLES
Isn't it great to have friends in France! As thanks for a very small favour I received this fantastic date block! 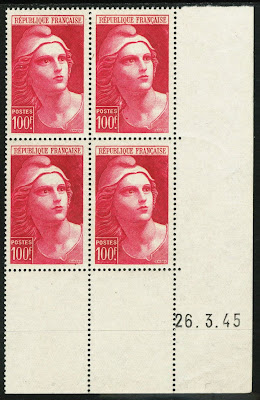 Which set me off thinking about blocks of stamps, part sheets, etc. I quite like them and when you're mainly focussed on stamps (rather than covers), they can lighten up your collection/page/display no end. The good thing is that in that way, you can show more information about the stamps. These date blocks are obvious examples as they show you when the actual stamp was printed. Now does that mean that we have to go for every date block we can find? I once tried that with my Machins but there are so many that that is just not a financially sound prospect. I suppose one way to collect them is to get first and last printing date of a stamp and all the date blocks that have any significance on the stamp. Again on Machins (I've done those the most you see), you could eg try and get the first date block when fluor was changed from yellow to blue. In that way, the date blocks included in your collection basically tell the story of that stamp. Great!
The same goes for cylinder/plate blocks. 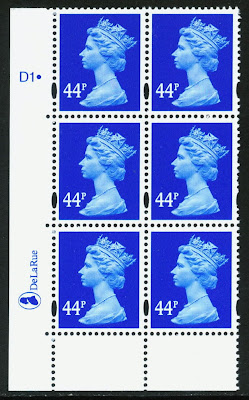 Again, it tells you from what cylinder a specific stamp is printed. And again, you don't always have to go for all the blocks that exist. This D1 dot block tells you that there's also a "no dot block" and that therefore a double pane cylinder was used. A new cylinder/plate number does not always constitute a change (that is to say, if you don't over-specialize) but new changes (like the deeper engraved Machin head on the current stamps) do usually constitute a plate/cylinder number change. I must admit though, that after finding out that with the Dutch Beatrix plate numbers, different plates keep the same number, the point of collecting these has somewhat paled.
Sometimes, blocks are just great to look at, especially with older stamps, such as this Wilhelmina block from WW2. 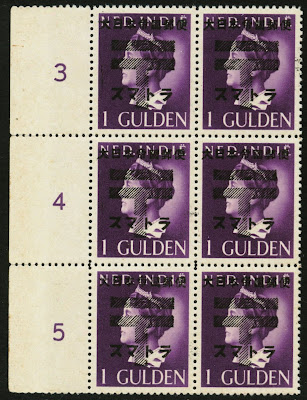 It doesn't tell you much, only that there are counting numbers on the side (although it is nice if you have an example from the other side of the sheet too, so you can illustrate that they run from 1 to 10 or 20 on the left and from 20 or 10 to 1 on the other! Perforation types are usually nicely illustrated on blocks too.
Varieties always look better in blocks, like this San Martin definitive imperf at right. 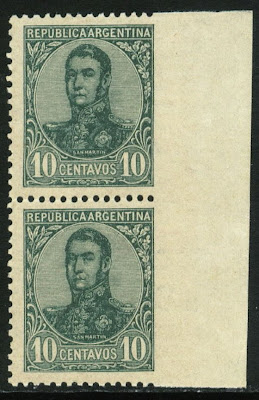 But that's basically just trying to impress! If you really want to do this properly, you have to have a positional block, that is to say, you can see where on the sheet the variety is. But with the marginal side imperf, I think it is pretty clear where this bit was situated on the sheet!
Ah well, look at my rambling on, and all that to thank Eric for his gift!
:-)
Adrian
British Commonwealth France Machins South America Wilhelmina

Pablo (yo) said…
Nice pair of San Martín, with one side missing perforation. That's a great example of a perforation in comb.
October 07, 2008 12:38 am