I'm taking you back today to the Kreisler definitives of the Netherlands Indies. 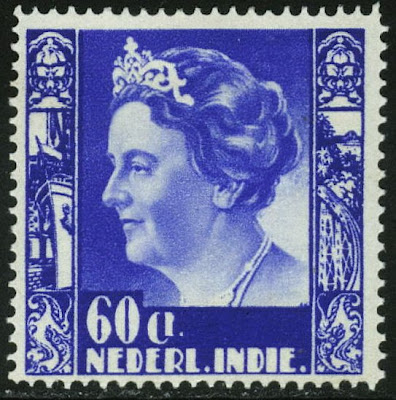 A little while ago, I showed you some proofs for that set, see here. As you can see, I recently received a comment from Reinier, which throws a new light (for me at least!) on those proofs. Reinier states that the proofs were by Kolff rather than Enschedé, but that production was not taken further because the authorities opted for the Van Konijnenburg design instead.


This would mean that the proofs should not be placed in the beginning of the Kreisler story, 1933, but much later. Because of the outbreak of WW2, Enschedé no longer could produce stamps for the Netherlands Indies, and G. Kolff & Co took over most of the stamp production. So this would put a date of 1940-41 on the proofs, with the Van Konijnenburg set being issued in 1941. Very interesting!


So, Reinier, if you're reading this:


a) where did you get that information from?
b) where can I read up on this?
c) would maybe the fact that these proofs were made without the side panels of the Enschedé design imply that Kolff intended to change the design of their stamp issue?


Let me know if you know and thanks so far!

after several comnputerr crrashes and loosing all my emails and also the passwords necessary to get in to some blogs, I may finally try to answer your cries for help regarding the Kolff issues.

Somewhere in January I was mailed by somebody who had a booklet published by G. Kolff and asked me whether I was familiar with it. I copied the pictures/pages and that was all that got saved. No address of the person who mailed me, nothing...

There you mayh the pictures....