Skip to main content
on March 17, 2008
HUGH FOR KING
In the eternal debate between republicans and monarchists, one main viewpoint has always been that monarchs inherit their position and presidents get elected. The French, clever lot that they are, managed to silence both camps pretty early, for way back in 987 they elected a king! 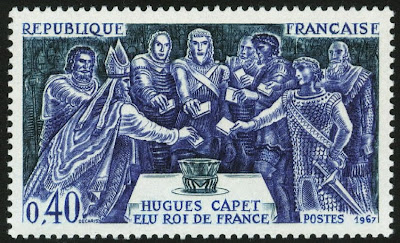 Hugh Capet may have been a nobleman, but he did not descend from a royal family. The ruling dynasty of the day, the Carolingian dynasty, however, had run its course, and a new era began under the Capetian dynasty. At the time, much was made of this election: the throne should not be acquired by hereditary right: a king should be chosen not because of his nobility of birth but because of the goodness of his soul.
Noble thoughts indeed!
:-)
Adrian
France