Skip to main content
on April 22, 2008
EXCITED
I've just come back from our annual National Congress at Perth where I've been having a great time, meeting old friends and buying stamps! Among many things, I've been stocking up a bit on Malta. Malta is that link between Europe and the British Commonwealth (as are Cyprus and Gibraltar) that allows you to build up an exclusively European collection and still have a bit of Commonwealth flavour, because their early-ish definitives look very much like the majority of Commonwealth definitives.
I've been buying a number of George VI definitives. Here's one of them, the 1.5d value. 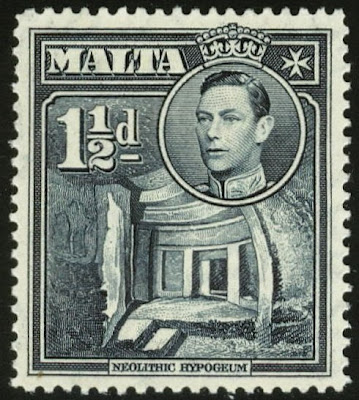 It depicts a neolithic hypogeum. To be honest, I had to look up what a hypogeum is, although I did presume it would be something like a burial chamber. This design turns out to be the Hal-Saflieni, now a UNESCO world heritage site. It is the oldest prehistoric underground temple in the world.
If you study the Malta section of your catalogue, you'll find that the country honours its history quite nicely on its definitives. Great! But just keep your hands off those birdies!
:-)
Adrian
British Commonwealth