Skip to main content
on April 02, 2008
LOST CAUSE
I was surprised to find that a) special aerogrammes were printed for mail from Holland to the military forces in the Dutch East Indies, who were so desperately trying to hold on to its colonial past, but that b) two types existed, and c) that of those two types another two types exist! That's four special aerogramme types in all. There must have been enough demand for all those special printings to be produced.
I have two of the four, the two with the Van Konijnenburg definitive design imprinted. These were isued in 1947, to be followed in 1949 by similar aerogrammes, but then with the Hartz definitive design imprinted, which I don't have (yet!).
As you can see, the first one has the letter L in the lower left corner. 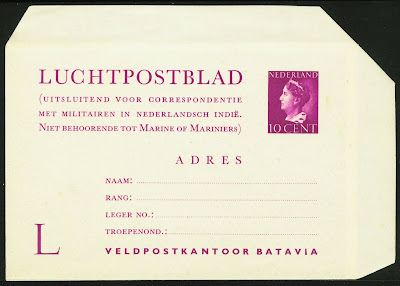 That is the L for Landmacht, or territorial army. The address is to the field post office in Batavia, with further particulars to be completed by the sender. The second version has an M in the lower left corner. 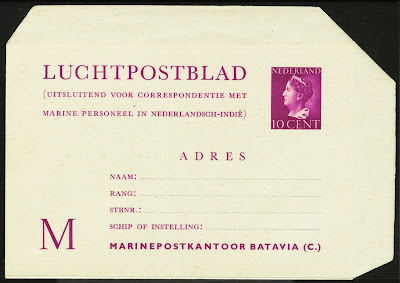 That is the M for Marine, or navy. This was sent to the navy post office in Batavia. I only wonder why, if there was enough demand for all these to be produced, I never see them used! Or maybe I just haven't looked well enough...!
:-)
Adrian
Wilhelmina